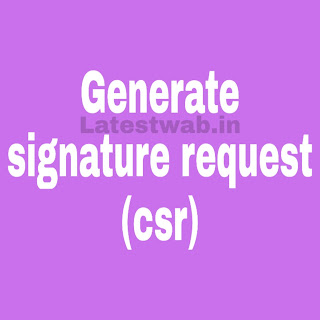 Use a Certificate Authority

Currently, the Internet has standardized on a certificate format known as X. 509. The X. 509 format
associates a public key with an identity, and is generally only valid for a given time period. The identity can
be composed of arbitrary name value pairs, but is currently generally composed the following minimum set
Country, Province or State, Organization Name, Common Name, and Email.

The first step is to generate a public private key pair, which can be done with the openssl command
assuming a 1024bit key

Next, in order to generate a certificate signature request (csr) an identity must be established. The

following command will read in the generated key pair, prompt for identity information, and generate a
request

The request wsuld then be sent to a Certificate Authority, who would (we hope) take additional steps to
verify the identity of the requester. The CA would then return to you a signed certificate, which could be
saved in a file sucH as server. crt. pem.

For a selfsignecl certificate, the owner is also the issuer. Such certificates are appropriate for root level or in situations where encryption is desired by authenticated identity is not necessary. In the spirit of
operi source, there are Certificate Authorities that do not r equire payment, like https caceft. ofg.
Red Hat provides a akefile to assist with the creation of certificates. From within the directory etc we may generate a self signed certificate by simply entering


Running make without a "target" or argument will display a usage statement.

: Provides user and token - based     authentication

The OpenssH project provides supp ort for the secure shell protocol, a mechanism for providing secure
open ssh packages provide themselves, other packages, such as sync and rdist, can use secure shel
as their transport mechanism.
If a system does not need to provide remote shell access, but does need shell access to other hosts, then
askpass and open askpass gnome packages if you are running x. In order to provide remote ssh
access to other systems, install the openssh server RpM, which provides sshd. The openssh
askpass  packages are used in conjunction with ssh-agent in an X sessjon.


Below is a list of the RpM packages and what they provide.